Skip to content
Posted on July 31, 2017Author Peter Hollings No Comments on Trump and the future (if any)… 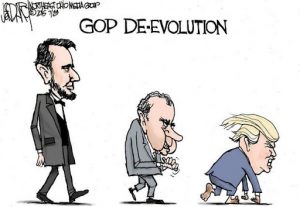 My philosophical view, as projected in my book “Future of Man – Extinction or Glory?” is long term. In that timeframe, the events of today are like the brief engine roar and rush of wind from a car speeding past on an Interstate highway, leaving only a swirl of dust to mark its passing.

But every now and then something happens in the here and now world that we should pay very close attention to, because it could drastically change the course of the future—even to the point that it downgrades the survival prospects for our species. And this is happening now.

I’m talking about Donald J. Trump. While clearly a buffoon—an almost cartoonish character—he represents a grave threat to our future, a bigger threat than terrorism or even nuclear war. But a bigger worry is the effect he is having on American (and world) culture.

Evolution brought about the beginning of the human adventure on this planet…and it hasn’t stopped. Until recently, the primary process involved was genetic evolution, paraphrased by its first crusader, Charles Darwin, as “survival of the fittest”. It took billions of years to produce homo Sapiens from life’s beginnings as a sludge of single-cell organisms in the warm ocean waters. Millions, if not billions, of species came and went from that beginning to today. Dinosaurs achieved the greatest fame in human science and history books as a dominant life form, spanning tens of millions of years, but the honor of longest land-dwelling creature probably goes to the humble (and generally reviled by humans) cockroaches. We are among the most recent arrivals, but inarguably we stand today at the top of the food chain, no doubt terrifying all of Earth’s life forms (or all that have the capacity to fear), whose existence now hangs by a thread, dependent on our self-centered whims.

Among my friends, opinion is divided between those who see some purpose to humanity’s existence and those who say that such views are just human vanity—that we are just one more life-experiment soon to turn to fossil bone and dust in a new strata in earth’s rocks. My position is that, even if we are to give way to a more durable species in the future, they will owe us a genetic and cultural debt as their ancestors. This conviction is based on the fact that our “success” on this planet is because of our intelligence, and intelligence will be the trait that dominates all life on this planet for the foreseeable future. So, just as we should acknowledge homo Erectus and homo Africanus as ancestors, so future man (homo Futurus), hopefully a truly intelligent descendant, will one day honour us.

And this is where I come to my point. Evolution, at this point in human existence, is far more about “cultural evolution” than biological survival of the fittest. By cultural evolution, scientists mean behavioural changes that will shape our future. Examples of importance that can be seen in the recent human record are changes in birth rates brought about by new social norms (assisted by man’s ingenuity in the form of modern day birth control). Most recently our “connected” world is homogenizing cultures and aspirations…as in McDonald’s everywhere and, more seriously, democracy and women’s rights. This is where the arrow of the future lies…and this is why Trump scares me to death.

It is clear that our future will depend on our, hopefully, good behaviour as a species. This includes recognizing that our technological prowess has consequences for our environment and therefore life’s future on this planet. Even more urgently, despite our success at slowing population growth, the sheer number of human beings on the planet and the competition for resources among the human “tribes” is going to require that we “grow up” and become to a significant degree more civilized—and soon—if we are to survive. We have to find a way to co-exist with, and be good neighbours to, all of our planet’s human citizens. You cannot build a wall to keep the world out. Like it or not our population growth and our appetite for a lifestyle that depends on technology, has, metaphorically and factually, reduced our world to a village.

Trump is a throwback to our tribal, chest-beating past, blaring out his alpha male messages. “Money and power is everything”. “Might is right”. “My tribe is the only tribe that matters”. Don’t trust “them” the only ones that matter are “us”. He pushes the buttons of those that mistake his noise for message and he dupes them into believing that his strong leadership will “make America great” again. Was America great when it bought slaves from traders to work in the cotton fields? Was America great when it dropped nuclear weapons on Japanese population centres? The past is the past and there are too many errors in our past to spend time bemoaning. But the future, if we are to have a future, dictates a much less tribal “us versus them” mentality.